I met you when I was 23 and working as a Curatorial Assistant at the Museum of Arts & Design. You and Lella came to work on the exhibition design for a show on the jewelry of Seaman Schepps. At the time, I had never worked with a real designer and I was in complete awe of your process. You were a great listener, and methodically took notes and drew sketches while we described to you our dreams for the exhibition. You had a mechanical pencil. You drew thick and distinctive lines, unquestionably bold.

Your notes were written in capitals, like an architect. You were stubborn and your stubbornness pushed all of us around you out of our comfort zones. I remember sitting with you and Lella, in the back of a yellow cab when we discussed the materials that we would be using to create the pedestals to display jewelry. You said "lead".  Lella said "MAAAAASSSSIMO, don't be ridiculous." You then described to us your vision of having the intricate jewelry stand out against the simplicity of the raw material. Your vision, was measured, austere and had perfect symmetry. As someone who had to work with the contractors to acquire the lead and to actually handle the lead to build the cases, I was of course completely terrified. Isn't lead toxic? Like, could this perfect design decision of Massimo's actually kill me in the long run?  We worked together and learned that wax detoxifies lead. We went to your studio (the first real designer's studio I had ever seen) and tested it out.  You had an I told you so look on your face like a devilish child. And so, we made the cases: 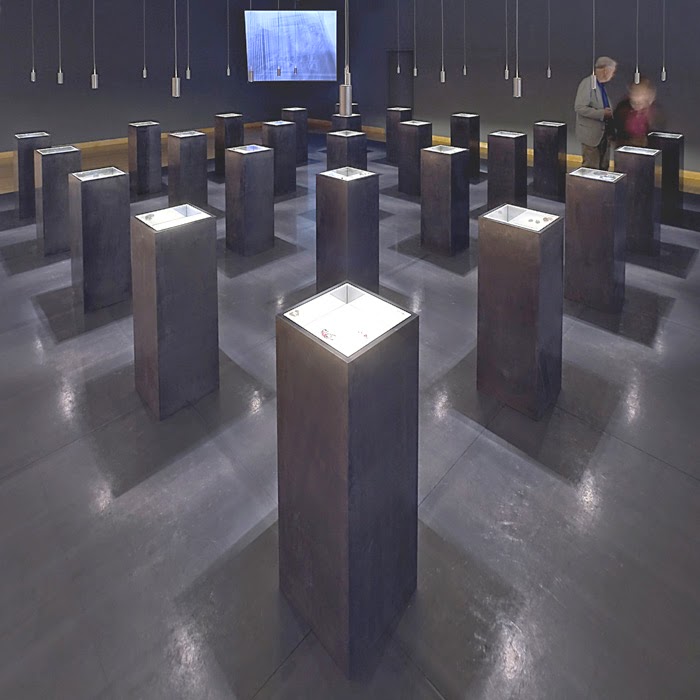 You loved a good fight. One of my favorite things was listening to you, Lella, Yoshi Waterhouse and Beatriz Cifuentes completely disagree about design direction. Lella was your partner and you had a beautiful banter that inspired me to be adventurous, and own my questioning nature.

At the time I wasn't sure what I wanted to do with my life. I was working in museums but found myself sketching in the galleries and taking side jobs just to draw. You saw me at lunch one day and asked me why I was wasting my talent and then you didn't stay around to hear an answer. Lella, of course, followed up with me and told me to try things out, to take in as much art and design as I could and that things will figure themselves out. You very much had the ask for forgiveness, not permission attitude, which I still to this day, admire.

I ended up working at the Rubin Museum of Art after that museum, and found myself constantly questioning and designing and thinking about my conversations with you. Eventually I built up enough courage to quit and went to design school. I learned about why I should admire you even more and read your writing on design, watched you speak in Helvetica and looked at your wealth of work over time. But really, that's just the evidence. You showed me how to be a designer because you embodied it. You had a viewpoint, and a goal of helping people to better understand the world they inhabit, through design. I am a stylistically a different kind of designer, but you taught me to own my stubbornness and to have an opinion.

I will always admire you. We are lucky enough to see all the design interventions that you have left the world on a daily basis.  Thank you for being bold and stubborn.

I already miss you.

Note: I learned that Massimo Vignelli passed away today. His son, Luca asked for all those for whom Vignelli was either an influence or an inspiration to write him a letter. This is mine.
Posted by Jess at 12:01 PM

In my previous post, I wrote about my user interface explorations in Appmaker. As I mentioned, those explorations lead me to start thinking a bit about potential features for the tool. One feature that I took a bit of a deep dive on is the concept of a recording your history while you are in the process of designing the app. The big problem/opportunity here is that a lot of time when you have tools like the goggles, thimble, appmaker or popcorn that are designed to encourage learning engagement, you have people create these one off pages, videos or apps in such a way that they have a kind of rough product, and little - to - nothing to help showcase the process. That's what I am noodling on.

Appmaker history will enable users to raise the value of their (collaborative) making process and learn from their design choices by integrating annotation into a users “save” workflow.

1. A maker does something in appmaker, like add a button. 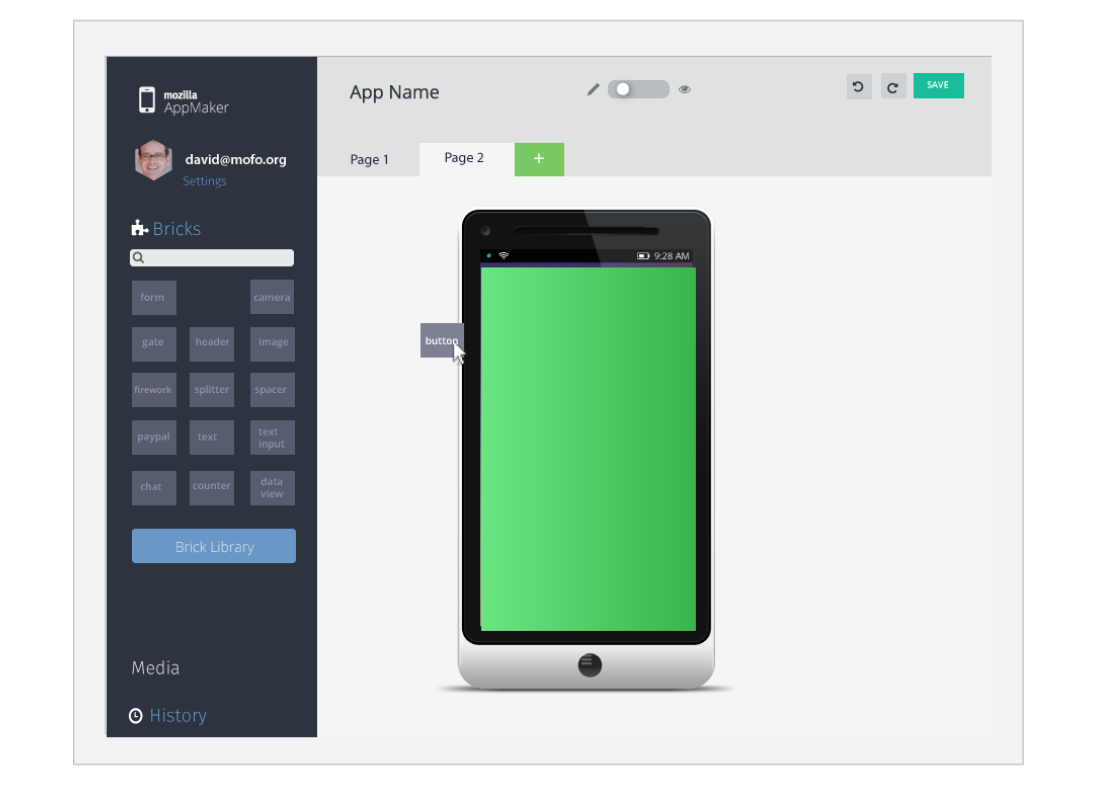 2. The maker saves their work 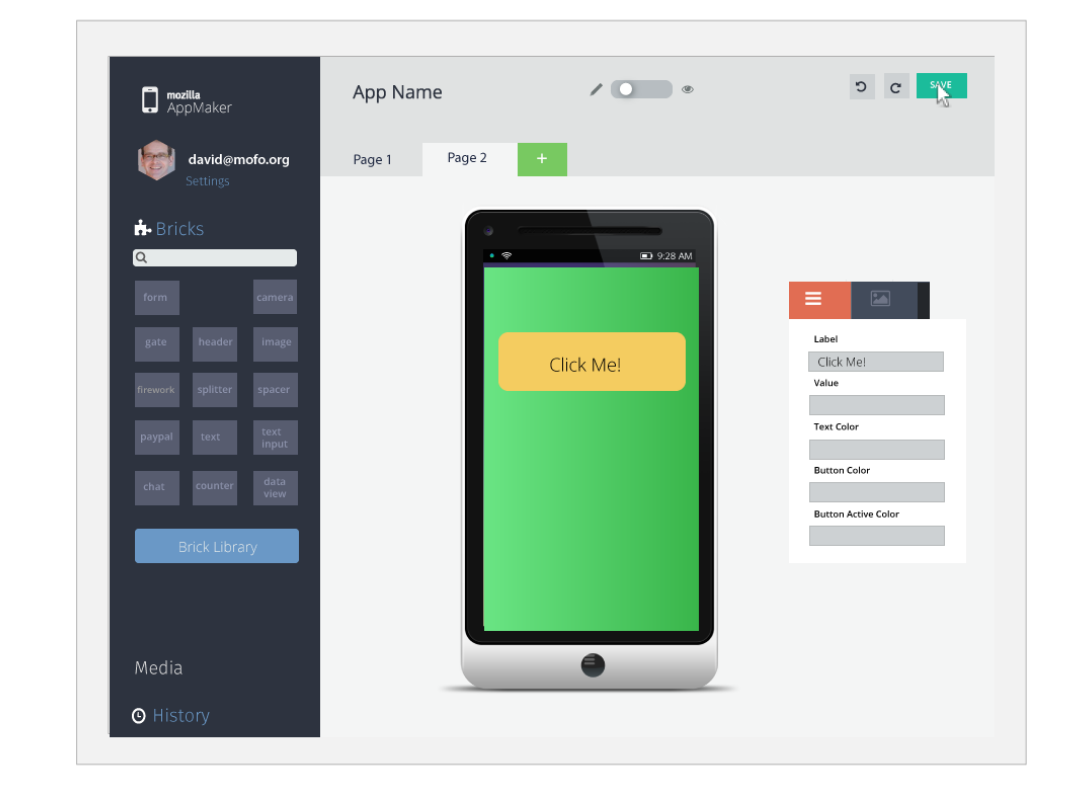 3. A timestamped modal appears, and that allows the user to Name the milestone moment and annotate it with comments. 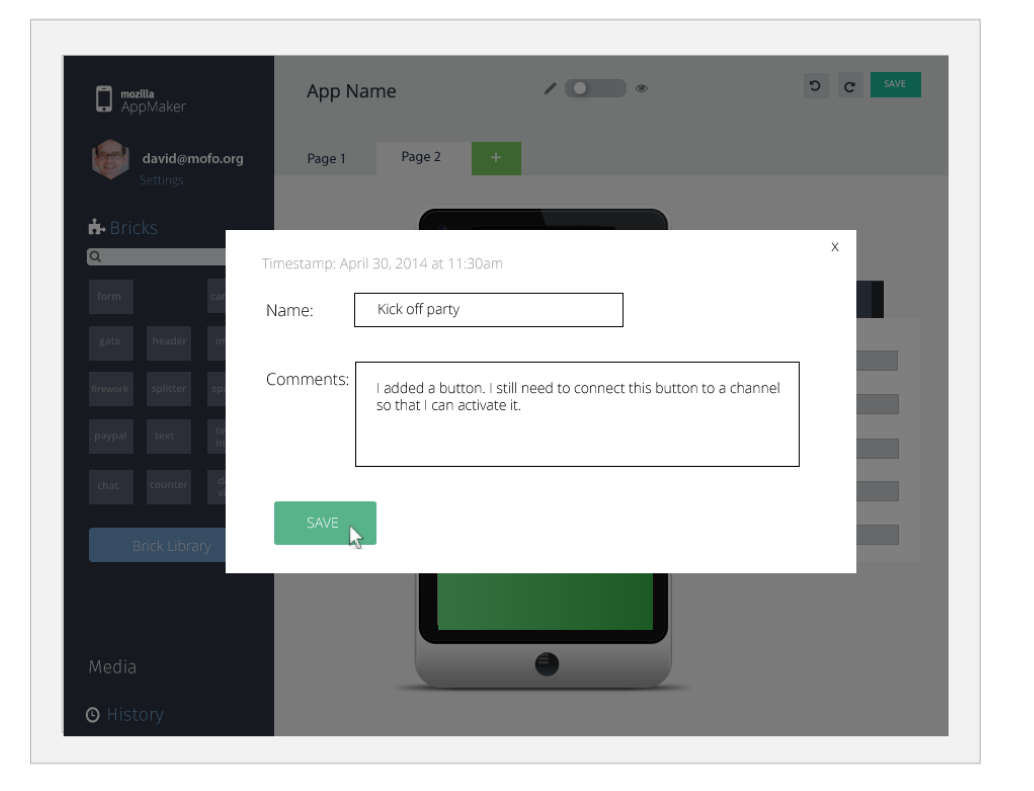 4. The maker is then given the option to watch a screencast of the moment, share it or take a look at their history tab. 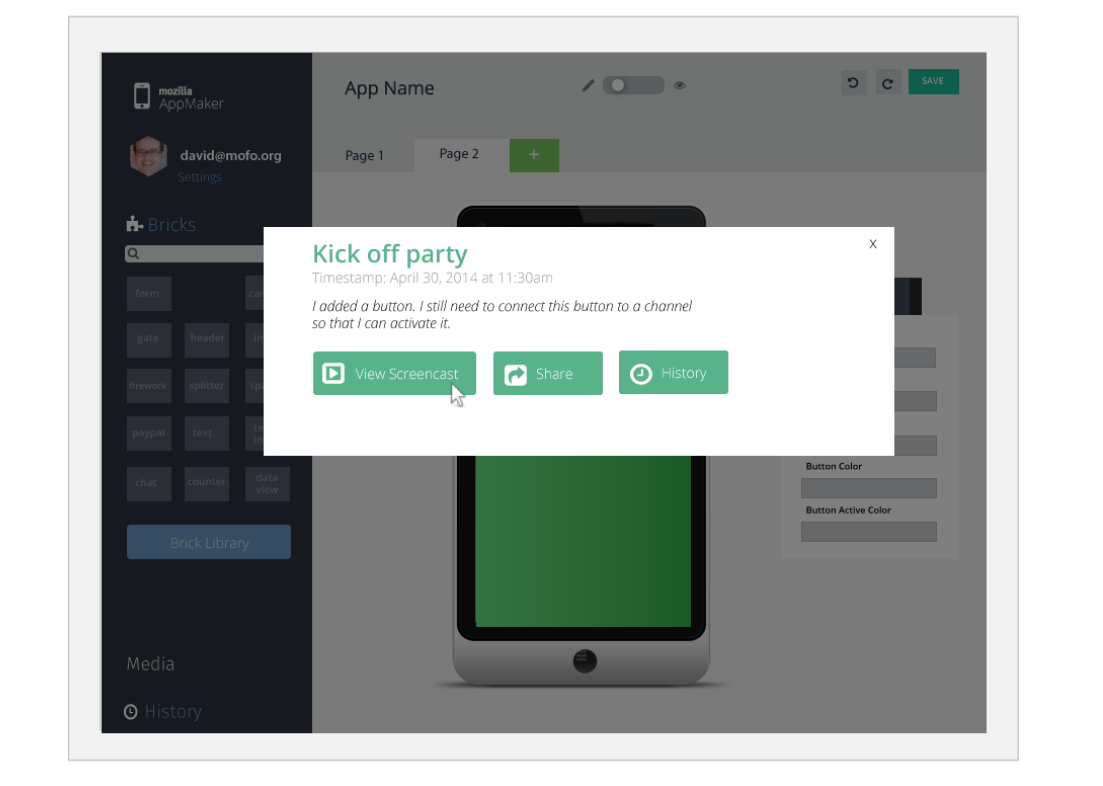 5. If they choose screencast, they can watch a video replay of all of their actions contained in their history. 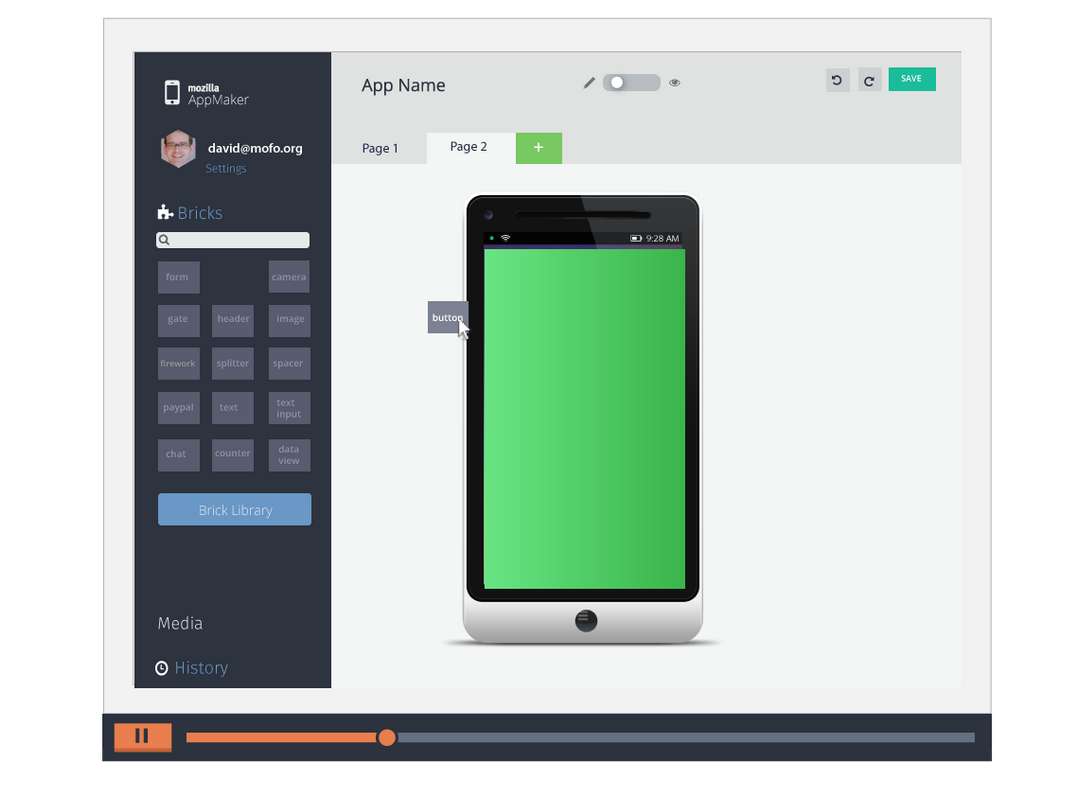 6. At any time in the maker's design process, they can now go to their history tab and see all of their saved version with annotations. They can also revert to this period in their making. 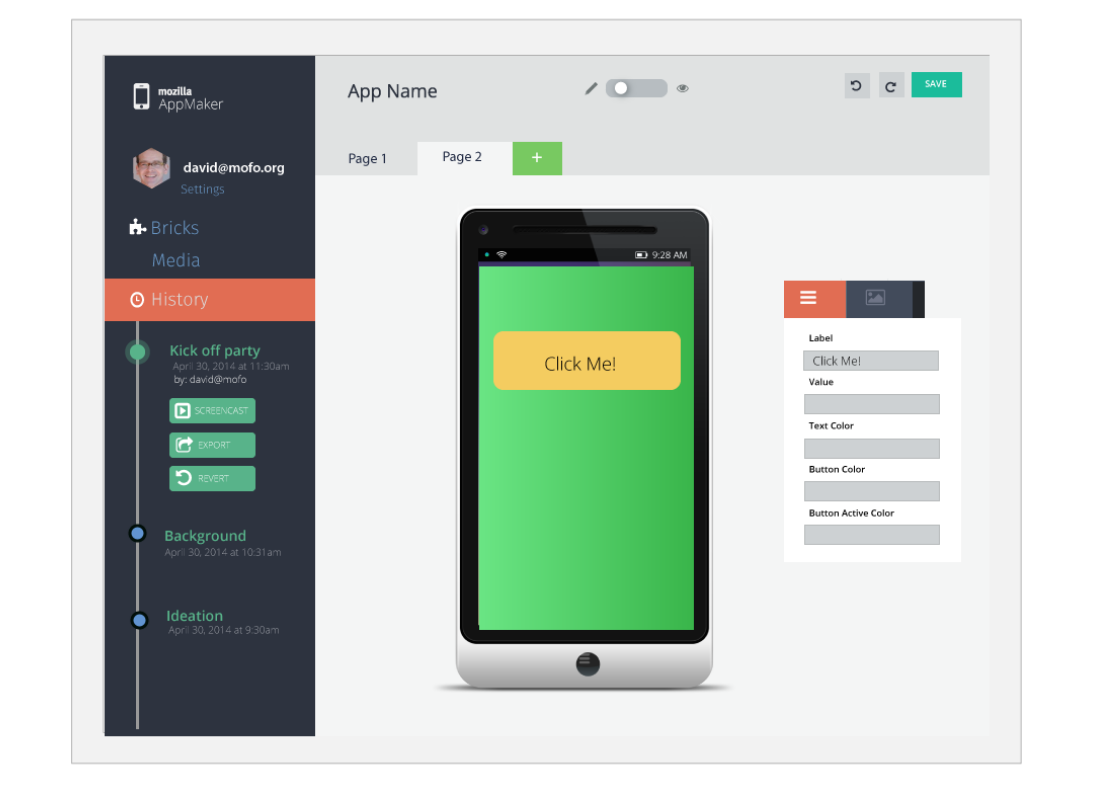 This is exciting to me because it rethinks the hierarchy of the end product. After designing, a user now has two bi-products: the app and the process by which the app was made. This is particularly useful for collaborative making and if you wanted to share or learn from others who shared.
Posted by Jess at 9:33 AM

This week I've been spending a bunch of time with the Appmaker team at the Mozilla all hands work week.  One thing, that 's really hard for me to do - is to work on products that don't seem to make visual sense to me - and that's kind of what was happening when I looked at the design canvas of Appmaker. Here is what the user interface currently looks like: 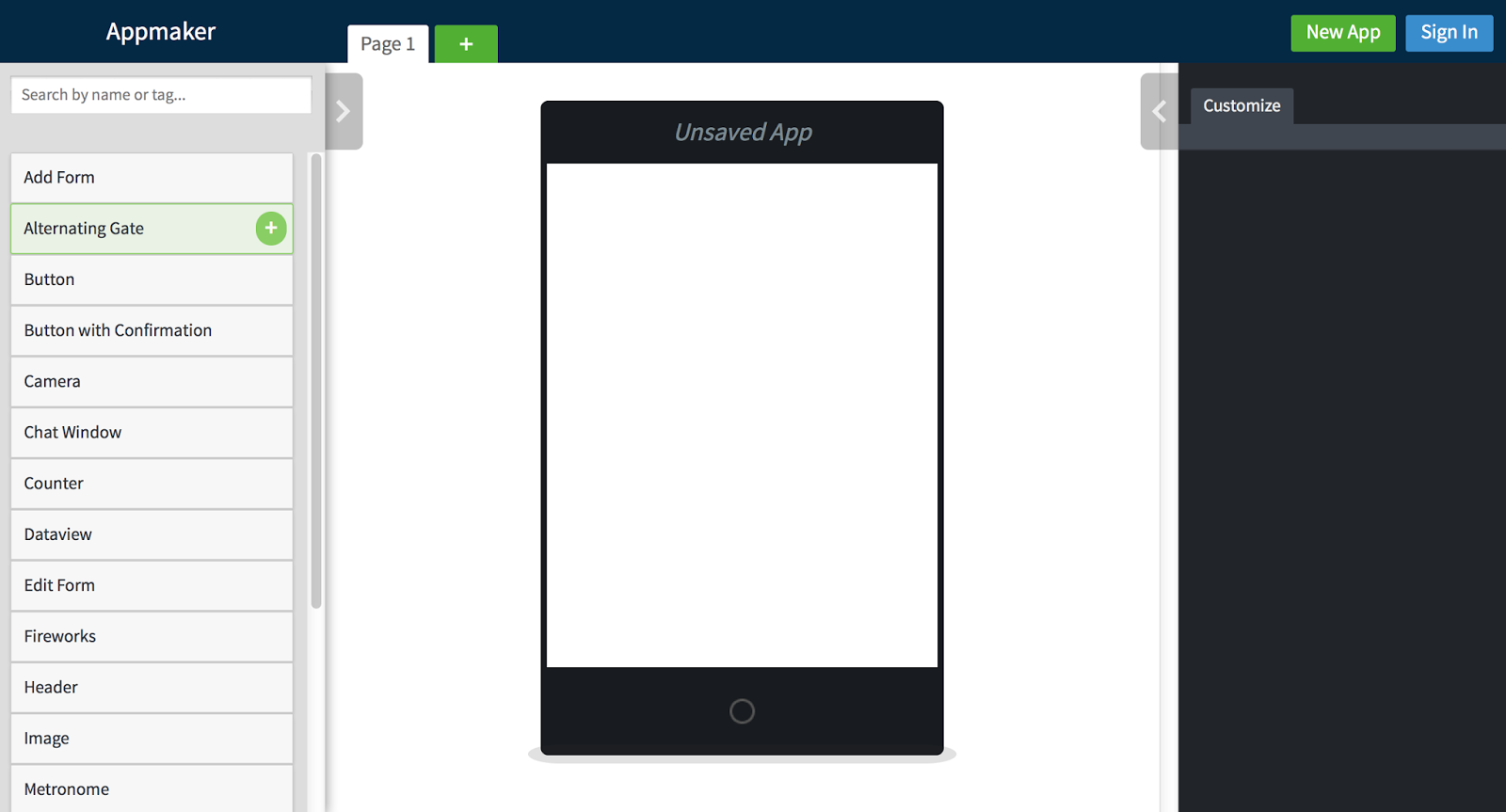 - The building components are super easy to identify and manipulate.
- The searchability of components
- The ease with which you can sign in or add a new app

What could use some work?

- The design canvas itself was bit confining. I felt like I was in a claustrophobic room when I designed
- It feels like theres a lot that I have to pay attention to in one glance and I can't figure out where I am supposed to be looking, clicking, thinking at any given moment.
- It still feels like a lo-fi prototype - so users can't really see the friggin' awesome potential for this tool.

Mockup Attempt One: The Webmaker Appmaker

For the first iteration of mocking up the UI, I took cues from Webmaker. My thinking here is that we could be delivering a consistent, cohesive product family offering. 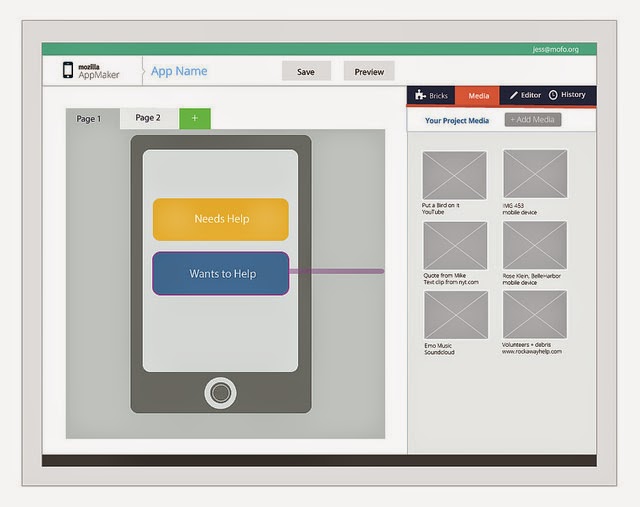 Since designing the UI mockup sometimes inspires me to rethink the tool, I added a few notable features here:

1. Media Library - the ability to use the mobile devices affordances to pull in assets to integrate into the app design

2. History - the ability to save your process, and revert to any moment in your designing 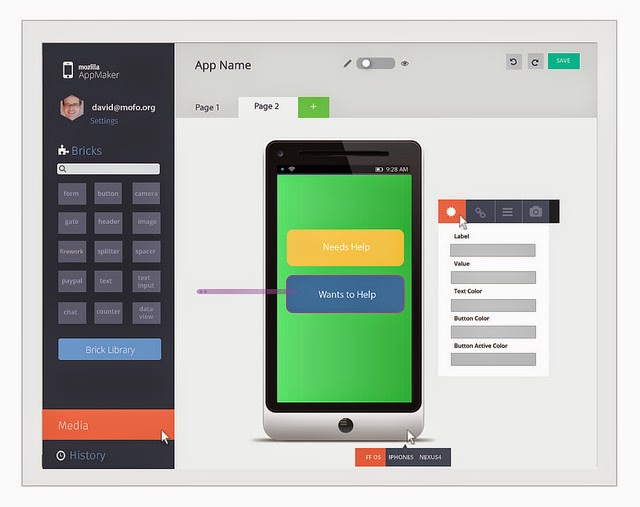 I took a bit of a different approach here. I thought through how I actually organize my space as a designer, and how that approach could be reflected in the design. When I design, I like to organize my space and shift things around the canvas as I am working on different components. Some fun things to note here:

- the phone itself is clickable so that you can change the model (the firefox phone is seen here).
- the toggle on the top of the canvas allows you to switch back and forth from different design modes: editor or preview
- the floating editor changes depending on what component you are working on.
- undo, redo.

That's all for now. Just taking the time to think through the designs and will probably user test with the Appmaker team to really figure out what's a good direction.