It's almost a year. A whole year - since the day that my life changed when Hurricane Sandy came and hit my hometown of Rockaway Beach, New York. I'm pretty emotional about it, but as I always say - the best form of revenge is iteration.

Last year, when the hurricane hit, I scrambled with local hackers and friends to pull together emergency web resources. It wasn't an easy task because we had amazing constraints: no power or wifi in the Rockaways, limited ability to travel to and from the area, and little news presence (among many other things).Things that we did: created paper prototypes for forms and interactions between locals in need and volunteers, and then we made digital tools to solve the problem. We even had a hackjam a few months ago in conjunction with the National Day of Civic Hacking to start thinking about this. We made it through, and eventually emergency response turned into rebuilding and life started to kinda feel like a new normal.

Then something happened - in Oklahoma. Tornadoes.  In a funny twist of fate, I got contacted by Luke Crouch who works at Mozilla with me (although I didn't actually know him until this moment). Luke reached out to me because he was basically doing the same stuff that we were doing in Rockaway several months before him and wanted advice. Then, I was contacted about another Mozillian - Stormy Peters - from Colorado, where there were massive floods. She also wanted advice and us Rockawayites knew all about flooding so we were able to give her more info than she ever would have wanted. I'm sure that you are seeing the theme here: emergency + hackers = emergency hack lab.

This Thursday - Saturday I am going to be hosting a virtual hackjam in conjunction with the Mozilla Festival. At the Festival I am going to be running what's called a scrumboard session on designing an Emergency Hack Lab. This means that I am giving a 10 minute talk on civic hacking and I will announce the goal to create an Emergency HackLab kit for people to pick up and use when an emergency strikes in their community. Then asynchronously we have a list of subtasks that people can complete to accomplish the overall goal.

You can check out the scrum tasks here. Feel free to add to the board and/or pick up a sub-task.

Right now we will be having virtual contributions from Rockaway to Oklahoma to Nairobi - it would be really great to get some local civic hacking action going on in your community. Join us, this is going to be a global hacking party!

BadgeKit: An Invitation to Innovation

Have you ever read an article, listened to a podcast or heard a speech that motivated you to perform some kind of action - only to realize that action was really difficult to accomplish? Well, that's kinda what's been going on for many people who try to implement a badge system or even something as basic as attempt to issue a badge to a single person. Often times, people are so inspired by the movement of badges that they take the next step and attempt to do something in their community to make badging real. This is fantastic - because Open Badges is both a social and technological movement. However, if the barrier to entry is so high - then we are making it difficult for those movers and shakers to, well you know, move. This common user experience helped us to identify an opportunity to design tools that make it easy as pie to dive into badging. The response to this is what we are calling BadgeKit.

We are even making these postcards to announce this.


An Invitation to Innovation

BadgeKit will not only make it simple to get started with badging, but it also will provide lightweight, modular and open options for the community of badgemakers. So now that I have your curiosity, I want to gain your attention. We are framing badgekit around a set of action verbs. Each verb represents an invitation to innovation around defining and refining the user experience for the particular action that the user is attempting to do.  Here are the verbs: Build, Assess, Issue, Collect, Share, Discover and Use. You can read what Sunny Lee wrote more about the verbs here.

BadgeKit evolved out of several years of work in this field as well as LOTS of user testing and research. Our initial goal will be to develop proofs of concept for experiences for each of the actions. In order to develop a vision for this work, I looked at the work that we have been doing for the Chicago Summer of Learning, the Connected Educators Month and for the Mozilla Summit. Each project helped us to produce some great open source solutions for distinct badging experience ranging in size from one badge to thousands of badges being issued. With each project, we user tested, got feedback and iterated - so just think of BadgeKit as our next big iteration on our offering. If you are familiar with the tools that we currently offer through openbadges.org - it might be easier for you to digest this information through recipes. 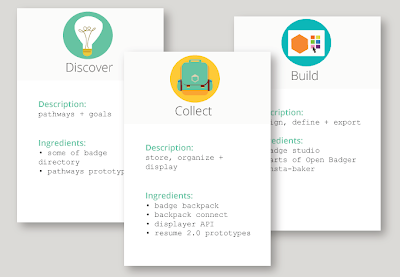 So now you know - what we are building and a little bit of why - but let me tell you a bit about how we are building it.  As a team of Mozilla and community designers, developers and people who have tried spinning up our own instance of badges - we have been trying to find our voice. Specifically, we asked ourselves "What makes something Badgeriffic?" Over the years we've had a hunch about what the answer is and over the past few weeks, I've done a bunch of initial exercises to help us to start to identify what our design values are. Even as I write this post, I don't have a definitive answer, but I am going to share with you our current thinking and ask you to give me some feedback and thoughts about what you value.

We kicked this off with a virtual sticky note activity: 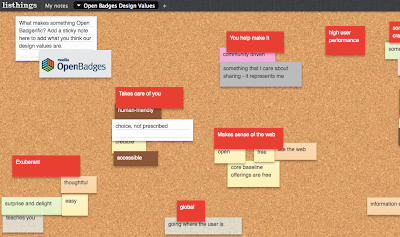 After people filled in what they thought made something "Badgeriffic," we clustered like-minded notes and came up with overall statements that we are calling values. Values give us a chance to say, "we did all of these things so we feel that ethically and aesthetically, this is a product that we can stand behind".  So, what I am starting to believe is that our values are aligning perfectly with the
Firefox Design Values 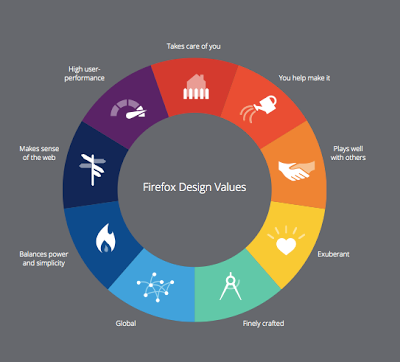 This makes sense because well, we are one Mozilla - and behind all of our work we have that heart connection that motivates us to work for a non-profit and we want to build things that make the web better.  On a high level, the BadgeKit offering will help to shape environments, build products, empower communities as well as teach and learn: the four pillars of our work at Mozilla that our Chief Lizard Wrangler Mitchell Baker recently presented at the Mozilla Summit.

In the next few weeks there will be an announcement about this work and we will be working on the action verbs proof of concept. In the meantime,  I would like your help: what do you value and what makes something "Badgeriffic" to you?