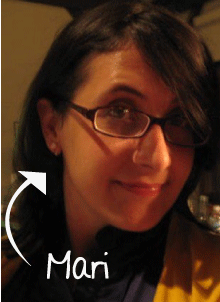 Mari Moreshead is awesome. She works at the Mozilla Foundation as the grease (wo)man, the person you go to when you need to get things done- and done well. She has personally helped me a whole lot- particularly during this one trip that I had to make while I was in Berlin with the flu, having to present Hackasaurus localization. Having a trustworthy, reliable and sassy co-worker is not only helpful, but it is needed in order to be a successful worker. Atul Varma and I were talking about her and thinking about how we wanted to thank her.

And so, we made lovebomb.me It started out as a simple sketch- and turned into this experiment in love and code. The idea is that you can send someone a lovebomb- or love note/ nod of appreciation and while you are doing it, you learn a little bit of html and css along the way. Here is one of the first mockups I made.... 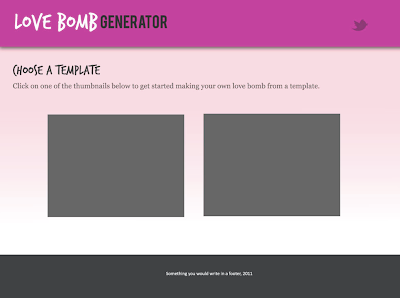 What was kind of fun and happenstance- was that I was running a bunch of workshops for teenagers at the exact time that we were tinkering with the idea. Atul had whipped up a prototype of what we are calling the Webpage Maker- a tool that will help users go from hackers to webmakers. I tested that tool with youth- and while iterating on both tools at the same time, somehow the two combined and became the current version of the lovebomb. 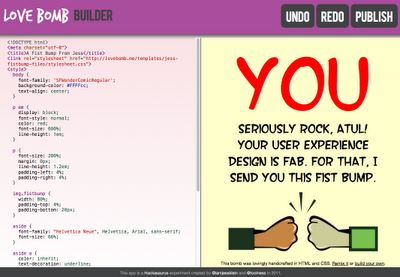 Designing the lovebomb has been a lot of fun for me- and it's rewarding because people immediately pick it up and want to just express joy or love or something happy. People smile using the tool.

I created a few templates, but I want to talk about one of them. It features a character, loosely - ahem- based on my colleague Chris Lawrence. Chris has a love of weird hats, masks and accessories in general (think- viking hats and gold sunglasses). I made this e-card in his honor, because he is another colleague of mine at Mozilla who is doing amazing work every single day. He isn't just working on one project - but possibly 30 at any given time. So, this is my way of giving him some "big ups." 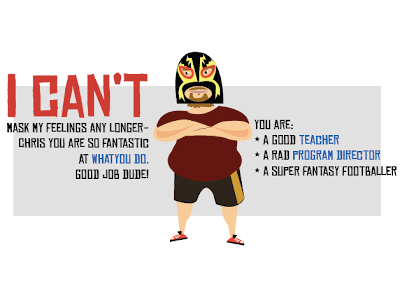 Next steps- well Atul and I are working on a more polished iteration of the lovebombs - I hope to post some of my mock ups in the next few days. I see that this is a great opportunity to teach someone something because there is ultimately a huge DESIRE to make the end product. So I am trying to build out the mock ups and keep true to some of the core learning objectives for Hackasaurus. But at the end of the day, it comes down to this: when you are inspired - you will make things that are challenging and difficult to make-despite yourself. I am just lucky enough to have amazingly inspiring co-workers surrounding me.

Oh and Mari- here is your lovebomb.
Posted by Jess at 9:55 PM