Imagine sitting in the kitchen with your friends, hanging out, chilling and making some cool stuff on the web. That's the idea behind the Kitchen Table event type that Mozilla is in the process of Beta testing for release in conjunction with the Summer Campaign.   This past week, I did my dogfoodin' and  Beta tested the Kitchen Tables event type with my family.

The Beta testing was scheduled for a two week window, that really coincided with Passover, so I decided to take this as a positive thing and do a "Hacking the Holidays" themed kitchen table. I had done that concept as a Hack jam with Mouse, but this was more challenging because it was with- the parentals. THE INVITE:
I asked my parents if they would be up for spending some time and making some things online with me when I visited. I created a little url based on some discussions I had with other user testers to send out as an invite. I said it would only take 30 minutes and we could have tea while we were doing it. This was a difficult sell. My parents, both retired teachers, and honestly very supportive of the work that I do and are the first people on the soapbox about teaching youth to learn to code, were very resistant. My mother, who is a web and computer enthusiast agreed to do it, and my dad said he would watch and asked if there was anything with paper that he could do. I followed all of the steps in the wiki, but I frankly think that a lot of Mozilla's efforts do not reach this older audience. In fact, I would go so far as to say that Mozilla appeals to 30 somethings - teens but does not really reach out to 40 + users. I think that my sell only worked because I forced my parents to do it. THE KITCHEN TABLE:
So, as I said, this was pre- Passover. My parents sat with me and Adrian (the boyfriend) and I took them to my kitchen table website and decide to teach them how to hack that. It was a bit crazy because I had to move fast to keep them focused. They really weren't super into it- particularly my dad. I don't think that there was a real value add for him in terms of hanging out and doing this, other than spending some time with me. Perhaps if he had a grandchild to do this with -- ahem, not suggesting ANYTHING! -- he would be more willing because it would be an activity that they could do together. We slowly lost him and just ended up with my mom. The session went alright, we essentially made a goal of hacking the "kitchen table" website to be a Passover table. The hardest concept for my mom and Adrian was to understand that every piece of content needed to be on the web to  show up. For example, they needed to put images up on flickr, or pull from an existing website. My mom really wanted to just upload an image to the editor and be done with it. This is a really important concept that I think that we need to do a better job communicating.

After about 25 minutes of tinkering and joking- my Mom came up with this: 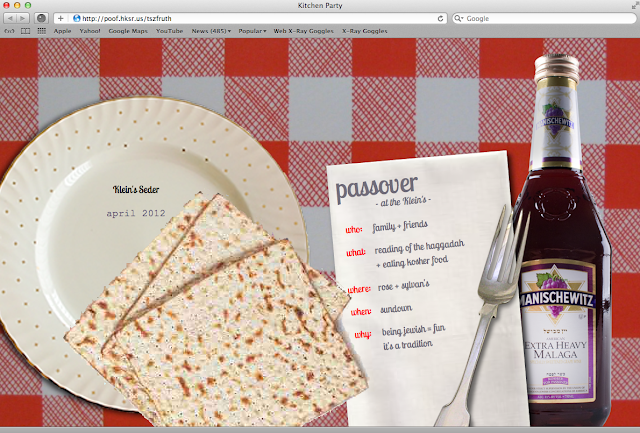 All in all- it was a success! My mom shared her link with friends and family. My dad, asked if I had something for him to read with, but I have a hunch my Mom will convince him to try it out on their own time.

WHAT WOULD I DO DIFFERENT/ NEXT STEPS: