After two days of doing a design sprint brainstorming about a tool that could help journalists learn webmaking, we decided to go right to the source for help. We invited about a dozen journalists to join us for a conversation today. We lucked out and got a fantastic group of professionals with a variety of different skill sets and backgrounds. Journalists showed up representing tons of different orgs, including: New York Times, Forbes, Gotham Schools, NYU Journalism Institute, Mashable, NYU ITP and the Huffington Post. 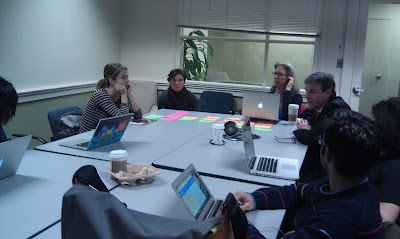 The main question that we asked this group was: "What do they you to make on the web?"We had a range of responses to this question.  There we are a lot of answers in the categories of data manipulation, data visualization, interactives, and text based interactives.


"There are two categories: a special project that's a one-off that blows people away and wins awards. But the thing that's more interesting are the things that can sustain and help a community. A database of property transfers that is maintained and is there for someone to access when they want to find out about it. Something that continues, is sustained, and is part of the fabric of info flow in a community. Data that comes in and continues to live." (note that all quotes in this post are paraphrased from the session)

We delved into an interesting conversation about what journalists need to know in terms of learning about the underpinnings of webmaking. Many participants talked about wanting to learn skills that actually fall into the category of "design thinking."


"Journalists don't have the knowledge of when to use a map vs not use a map. Or from a story to getting more interactive. They need to understand that a story isn't just an article, that it can be a whole bunch of different things. design thinking methodology"

"When you get down to it, we have a history of journalists as writers. But the last thing you want is a situation when all the journalists become coders. The more powerful thing is to have more of that process--the methodology/training/etc. To run a group of coders, or talk to coders. To know enough about your topic to come up with ideas and know if something is feasable or not. Not to be condescending, but 'skills are for interns' they are important to know to do, but nobody's going to make work-changing this just coding CSS. Skills are great and they're important, but it's about getting to understand the bigger picture. We spend a lot of time on, what do you call it, agile journalism."

I explained to the group that I personally have no interest in forcing anyone to learn how to code, but I was interested in learning about what would empower journalists to take an interest in webmaking.

"A big problem is internal. Which traffic cop gives the most tickets per parking meter: you dont' want to wait for six weeks for the data guys to come back to you with the answer. It's about being able to quickly test a hypothesis that could be interesting. There could be a story here--well, you want to know that quickly. Maybe the distribution of skills in the newsroom is 200 writers and 2 coders--it's going to be a long time before that. How much coding do you need to be able to play and test those hypothesis?"

"It's the bridge/demystification thing. There's a big wall--it feels like it. But then you go to hackjams and it feels attainable. It demystified it. When you realize those tools are attainable."


Mentorship and peer based learning was another topic that came up. One participant admitted to the group that he had signed up for CodeAcademy because of "social peer pressure" but then is now in the position where he has 6 untouched lessons in his inbox. This is because the great myth about something like CodeAcademy is that you are doing it with your friends. You signed up because your friends tweeted about it and you got all pumped up and signed up together- but then you are at home by yourself at the end of the day- not coding. Another participant talked about how she and a friend got a book and together followed all the steps to learn Python. After a month or so, they hired a "geek" to ask questions. We talked about how there are online communities for that like Stack Overflow or Quora- but these are often intimidating communities where a journalist would never think to go.


We asked for some initial feedback on the prototypes that we are working on. Here were some of their responses:

1) On the sequencing of learning content: Is the tag flashy enough to be the first thing that is taught in the instructional overlay?

2)  On the editing window: I see a lot of use of the immediacy of the left/right pane as tool

3) On if this is useful: Yes: even myself, on my Tumblr, if I want to make a change, etc, I have to publish it, look at it, reload, etc, that's incredibly frustrating.

4)  On Badges: I can totally see only entertaining resumes from people with that badge. And if you don't have it, spend a weekend to earn it.
At the end of the session- Carl Lavin was generous enough to sit with me and tell me-- if we were going to do webmaking 201, 301 etc for journalists what topics would he want covered. He wrote out these cards for me: 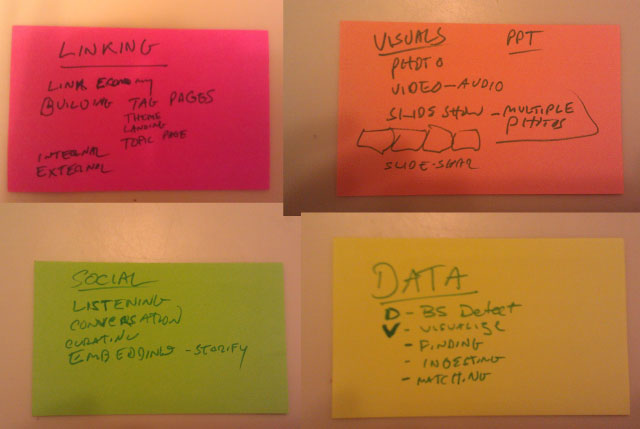 I think these will be really useful when we start to build out learning pathways for our Mozilla learning offerings.
I spent a good deal of time picking the journalists brains as well about the topic that I have been struggling with this week- about framing this as a project about storytelling or something specifically for journalists- and many participants told me that they prefer the storytelling angle because it is something that can appeal to a larger audience. Some of the journalists told me that that "journalism" means different things to different people, but at the end of the day everyone has a story to tell. And that is something that I can bake into the prototype!