As I mentioned, last week I worked with Anna Debenham and some local tweens from Toronto on this hackable comic idea. We prototyped a simple storyboard for what could be the intro to the comic- how the main character (currently Sue) acquires her superpowers of hacking the world wide web for the good of the world.

I drew up the comic and played around quite a bit with navigation (horizontal vs vertical vs ZOOM). Additionally, we started to think about how we could incorporate actual hacking in the comic. There is a moment for activating the goggles and a sketch about how one of the characters is saved by the deletion of an element using HTML.

Here is my mock up (pulled together using Photoshop stitching): 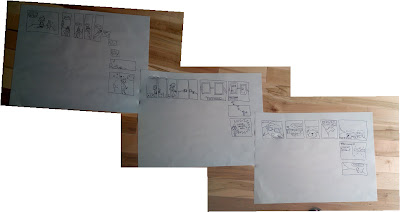 Click on the image and go to Flickr for the best viewing. I annotated the flickr version with tons of notes to explain both the story and the interactivity.