How One Girl is Changing the Web 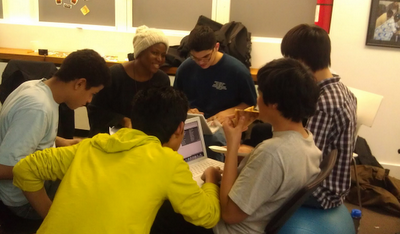 
"The Mozilla Hackasaurus workshop was a once in a lifetime experience."


From X-ray Goggles to Hack Jams, Mozilla is giving kids the tools to remix and shape the Web — moving them away from consuming what already exists and toward shaping and building a more awesome Web — and I'm thrilled to be a part of it!

Projects like Hackasaurus are helping to create a generation of Webmakers — and today I want to introduce you to Zainab Oni, an extraordinary 15-year-old who is not just remixing the Web, but is teaching other kids how to remake it into anything they want it to be.

Zainab is a sophomore at Hudson High School of Learning Technologies in New York, where she serves on the school's MOUSE Squad — a student-led technical support team that's part of a national program to help improve technology literacy skills. She's also a rising star in the world of hacking — something she recently discovered meant a whole lot more than just "snooping around."

Through a project led by Mozilla's Hive Learning Network in New York, we held some Hackasaurus workshops at MOUSE headquarters, and it was there that Zainab's understanding of the Web began to transform. Hackasaurus opened the door to a whole new way of thinking about the Web for Zainab, simply by exposing her to how she could create and change it. Now, as a Mozilla Youth Ambassador, she'll be taking everything she's learned to help facilitate Hack Jams with her peers at after-school programs later this year using Mozilla tools.

Take a minute and check out Hackasaurus to find out why it's changing the way Zainab thinks about the Web.

The online experience presented to most kids today is one that is delivered in a shiny, fixed package — but Mozilla is changing that. Just ask Zainab:

"We were introduced to Hackasaurus, a tool that makes it easy to mash up and change any website with the use of X-ray Goggles. You can remix any website and change it up to become your own...it was new and exciting."


When we launched Hackasaurus in beta, I saw kids eagerly interacting with the tools — and challenging each other in "Hack Battles," a super cool prototype we developed at last year's Mozilla festival — and I knew we had to grow this project and get it into the hands of even more kids.

And thanks to Mozillians like you, we are developing a summer campaign around learning and making. We'll be reaching out to folks of all ages and inviting them to take part in creating really cool stuff on the Web. And they'll get the opportunity to see what others are making across the globe and even the chance to hack each other's coded creations.

We're still putting the finishing touches on our summer plans — but you can sign up here and we'll keep you updated.

Giving everyone the power to remix, make, and share the Web is something we are committed to. Thank you for being a part of it.